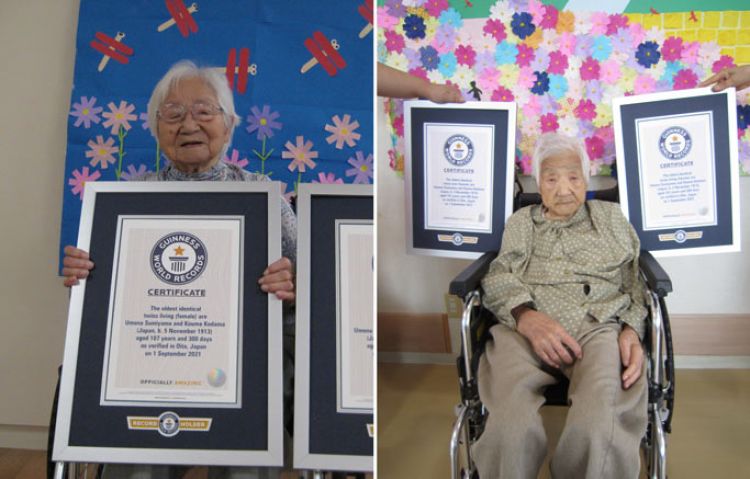 Thanks to the Guinness World Record News for the following story:

Currently living in separate locations, the official certificates were presented to Umeno (above left) and Koume (above right) by care home staff.

Umeno and Koume were born on 5th November 1913 on Shodo Island, Kagawa prefecture, Japan, into a large family of thirteen.

According to their family members, the twins are both sociable and positive and hardly worry about things. Apparently, Umeno is more strong-willed, while Koume is more gentle.

Their upbringing was similar to that of a TV drama, the twins recall. It was also a time where being a twin was enough of a reason to get bullied, and that was one of the toughest experience in their childhood.

The twins started living apart from a young age. When the twins finished elementary school, Koume left the island to help her uncle.

The twins experienced two world wars. Umeno had to vacate her home towards the end of the Second World War as an air raid shelter was constructed in the mountain behind it, only for the war to end shortly afterwards.

Because the twins were over 300 km apart, they were unable to catch up regularly, and mainly saw each other at weddings and funerals. However, once they were around the age of 70, they travelled together for Buddhist pilgrimages on several occasions.

As Umeno and Koume got older, the twins joked about reaching the age of Kin Narita and Gin Kanie, who were not only the previous record holders for the oldest identical twins living, but also a household name in Japan.

When they celebrated their 99th birthday (a custom in Japan), Umeno looked at the photo of Kin and Gin and said "I think we look younger"!

Although the twins joked about becoming record holders, their family said they didn't expect them to really break Kin and Gin's record, and were shocked when they did!

Both Umeno and Koume now live in different care homes.

Due to COVID-19, Guinness World Records were unable to visit the twins in person to present them with their official certificates and they were sent to the sisters instead.

According to care home staff, Umeno was in tears as soon as she saw the certificate.

Koume, whose memory is not what it once was, sadly couldn't fully comprehend the significance of receiving the certificate.

However, her family are pleased that Koume's achievement has been officially recognized, given that Koume often talked about Guinness World Records over the years.