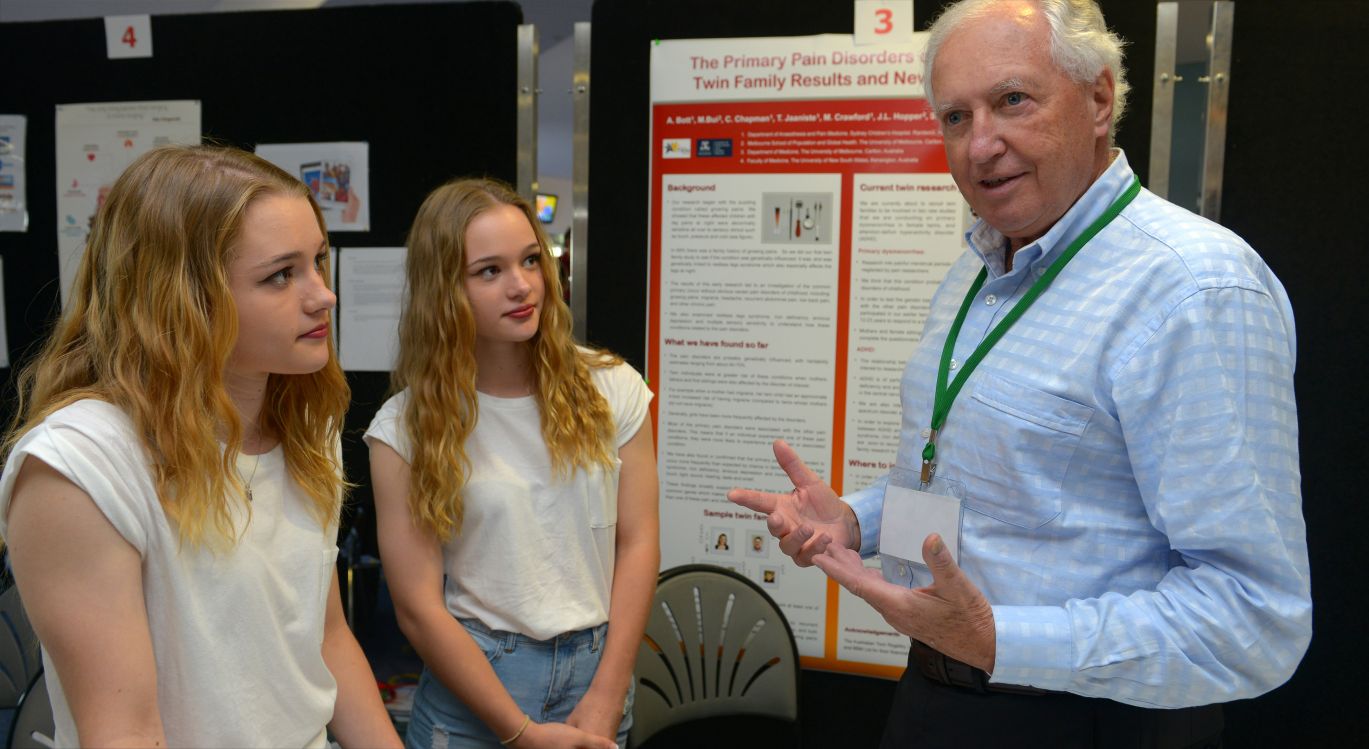 “On behalf of all at Twins Research Australia, we congratulate David wholeheartedly on this well-deserved recognition. Few have contributed so broadly to the field of paediatric pain medicine, both clinically and in research,” said TRA Director, Professor John Hopper.

The twin family research of Dr Champion and his colleagues has focused on pain disorders of childhood and adolescence including growing pains, migraine, headache, recurrent abdominal pain, low back pain, and persistent chronic pain.

Findings from his team's research have contributed to better understanding of these disorders and improved diagnosis including:

A lifetime of achievement

Following is an edited extract from Dr Champion’s award citation that appeared in the Australian Pain Society Newsletter, May 2020:

“Associate Professor David Champion AM has had a singular career. Well-known for his clinical evolution from rheumatologist to clinical pharmacologist to pain physician. In adult, and especially paediatric spheres, what distinguishes David is his remarkably long-term involvement in research while working full-time in private practice – a very uncommon combination in the modern era.

David established the modern Department of Rheumatology at St Vincent’s Hospital, Sydney, in 1974. Having trained also in paediatric rheumatology in the UK and the USA, David began a Paediatric Rheumatology Clinic at Prince of Wales/Sydney Children’s Hospital in 1975, collaborating with Professor John Ziegler and Dr John Feller, and continued that for about 35 years.

In 1986, David founded the Pain Research Unit at Sydney Children’s Hospital. The early focus of this group was primarily children’s self-report and behavioural measures of pain intensity.

Under David’s leadership, the unit’s research interests diversified into areas such as twin studies in paediatric pain, children’s attention and distraction, information provision, somatosensory testing in children, and pain and the family.

In 1998, David was awarded a Doctorate in Medicine from the University of Sydney and, in 1999, he was inducted as a Foundation Fellow of the Faculty of Pain Medicine of the Australian and New Zealand College of Anaesthetists. Since 2003, he has held a conjoint appointment as Associate Professor in the School of Women’s and Children’s Health at UNSW Sydney.

David has been a member of the Australian Pain Society since the early 1980s – probably the first rheumatologist in Australia to do so – reflecting his recognition that rheumatology and general medical paradigms were inadequate to explain the painful conditions experienced by many patients. He is also a long-serving member of the International Association for the Study of Pain, and the APS Pain in Childhood (Special Interest Group).

David Champion has been one-of-a-kind during a long career characterised not only by sustained activity and enthusiasm, but also by a willingness to search for and adapt to new knowledge and thinking, when so easily he might have followed more conventional paths.

Few have contributed so broadly to the field of pain medicine, both clinically and in research. In 2018, he was appointed a Member of the Order of Australia for significant service to medicine in the field of paediatric rheumatology, and to medical research and treatment of musculoskeletal pain. He is indeed a Distinguished Member of the Australian Pain Society.”