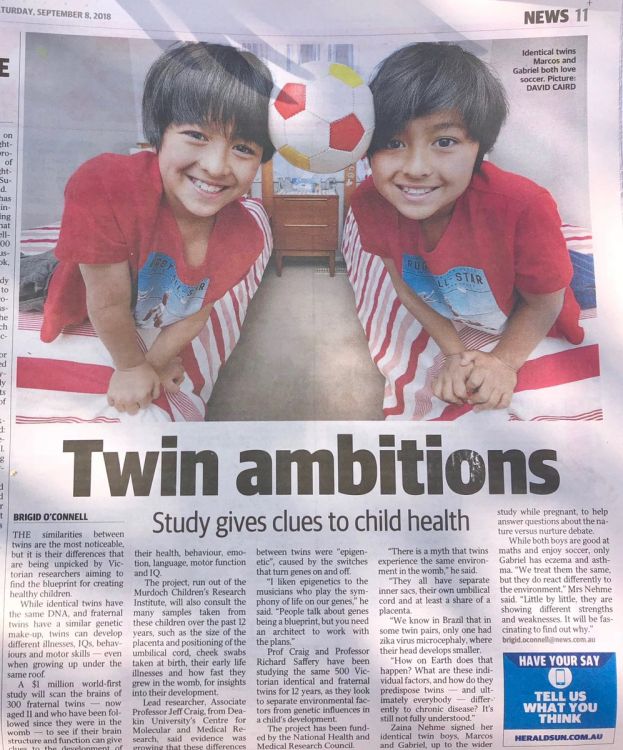 Melbourne's Herald Sun reports on a $1 million world-first study that will scan the brains of 300 fraternal twins - now aged 11 and who have been followed since they were in the womb - with the aim of finding the blueprint for creating healthy children.

The similarities between twins are the most noticeable, but it is their differences that are being unpicked by Victorian researchers aiming to find the blueprint for creating healthy children.

While identical twins have the same DNA, and fraternal twins have a similar genetic make-up, twins can develop different illnesses, IQs, behaviours and motor skills — even when growing up under the same roof.

A $1 million world-first study will scan the brains of 300 fraternal twins — now aged 11 and who have been followed since they were in the womb — to see if their brain structure and function can give clues to the development of their health, behaviour, emotion, language, motor function and IQ.

The project, run out of the Murdoch Children's Research Institute, will also consult the many samples taken from these children over the past 12 years, such as the size of the placenta and positioning of the umbilical cord, cheek swabs taken at birth, their early life illnesses and how fast they grew in the womb, for insights into their development.

Lead researcher, Associate Professor Jeff Craig, from Deakin University's Centre for Molecular and Medical Research, said evidence was growing that these differences between twins were "epigenetic", caused by the switches that turn genes on and off.

"I liken epigenetics to the musicians who play the symphony of life on our genes," he said. "People talk about genes being a blueprint, but you need an architect to work with the plans." Prof Craig and Professor Richard Saffery have been studying the same 500 Victorian identical and fraternal twins for 12 years, as they look to separate environmental factors from genetic influences in a child's development.

The project has been funded by the National Health and Medical Research Council. "There is a myth that twins experience the same environment in the womb," he said. "They all have separate inner sacs, their own umbilical cord and at least a share of a placenta.

"We know in Brazil that in some twin pairs, only one had zika virus microcephaly, where their head develops smaller. "How on Earth does that happen? What are these individual factors, and how do they predispose twins — and ultimately everybody — differently to chronic disease? It's still not fully understood."

Zaina Nehme signed her identical twin boys, Marcos and Gabriel, up to the wider study while pregnant, to help answer questions about the nature versus nurture debate.

While both boys are good at maths and enjoy soccer, only Gabriel has eczema and asthma. "We treat them the same, but they do react differently to the environment," Mrs Nehme said. "Little by little, they are showing different strengths and weaknesses. It will be fascinating to find out why."