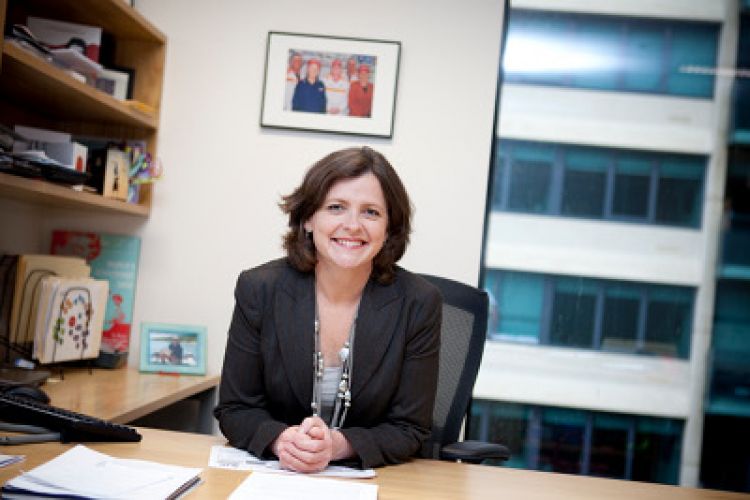 Ged Kearney is a mother of four (including twins), with an extended family of eight siblings, a company director and the ACTU President. How could she possibly fit yet another thing into her already hectic schedule!

But, as Ged explains, she couldn’t resist taking on her new role as an ATR Ambassador as it combines her greatest passions with supporting a cause close to her heart.

As a former health care professional and the mother of twins, she hopes to combine these experiences with her national profile to give back to the multiple-birth community and twin research.

Ged's background
The second youngest of nine children, Ged grew up in the inner Melbourne suburb of Richmond.

She became a registered nurse in 1985, working in acute care in public and private hospitals as well as a nurse educator. She has been an elected official with the Australian Nursing Federation since 1997 and became its Federal Secretary in 2008. She began her current role as ACTU President in July 2010. She is also a Director of CBUS Superfund.

She has four children - identical twin girls, Bridget and Alexandra, born in 1987, followed by Ryan in 1991 and Elizabeth in 1993.

A whole family approach
Her family and her twin girls have been long supporters of the twin registry.

They joined their first twin study looking into genetic factors in epilepsy in 1997. More studies were to follow, investigating such diverse subjects as twin social behaviour, diet and bone mass, and Attention Deficit Hyperactivity Disorder.

Although their mum isn’t there to hold their hands anymore, Bridget and Alexandra, now 25, continue to be involved in the ATR.

“As a mother of twins, I know that twins are special and it has been very rewarding to give back something that is unique to our family to improve the lives of others,” says Ged.

“I urge twins and their families to join in the amazing twin community that is the ATR.”

Read more about Ged’s experience as a mother of twins and her wish to give back to the multiple-birth community.

“As a mother of twins, I know that twins are special and it has been very rewarding to give back something that is unique to our family to improve the lives of others.”